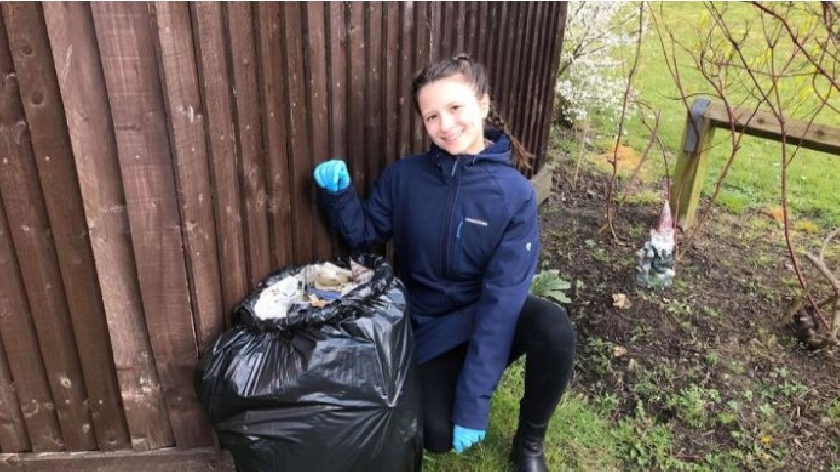 Eva, a local 13-year-old schoolgirl, has challenged herself to pick up 100kg of litter from across Milton Keynes.

Before starting the challenge, Eva had been doing litter picking across the city as she saw first-hand how much of an issue it had become.

Many organisations across Milton Keynes, including The Parks Trust, have also noticed a large increase in rubbish being left behind.

At the start of June 2020, The Parks Trust collected over 800 bags of litter from Milton Keynes' parks in just one week alone.

"We are complaining that people of all ages are littering, but we do nothing about it," Eva said.

That is why she decided to set herself a challenge to collect at least 100kg of litter within four to six weeks.

Eva continued: "Hundreds of thousands of animals, plants, birds, and sea creatures are suffocating each day because of our unthoughtful actions. Pieces of litter are washed down by rain in rivers or lakes, and this pollutes our waters as well. People are unaware of what can a simple piece of trash do to our environment, and how this can lead to global warming. That is why, as a student, I think it is time to act."

The 13-year-old has been travelling across Milton Keynes on her bicycle, armed with a litter pick and a black sack ready to collect any rubbish that she sees.

Eva has been documenting her progress on YouTube and managed to collect around 33kg of litter in the past week alone. She says this is more than double what she collected the week before.

Eva has also launched a GoFundMe page to raise money for litter picking supplies for her school, and her form tutor has already donated some money towards it.

Eva concluded: "Donate, share, and challenge yourself to do the same. Be a part of the change!"

In other news, last month a group of volunteers collected over 70kg of rubbish from Lodge Lake, which is a popular beauty spot in the city.

It is one of the smaller lakes in the city, and a walk around it takes just thirty minutes, but the litter that was collected is rather surprising.

Over a three hour trip, the volunteers managed to collect fourteen black sacks worth of waste.

READ MORE: Volunteers collect over 70kg of rubbish that was dumped at Milton Keynes beauty spot