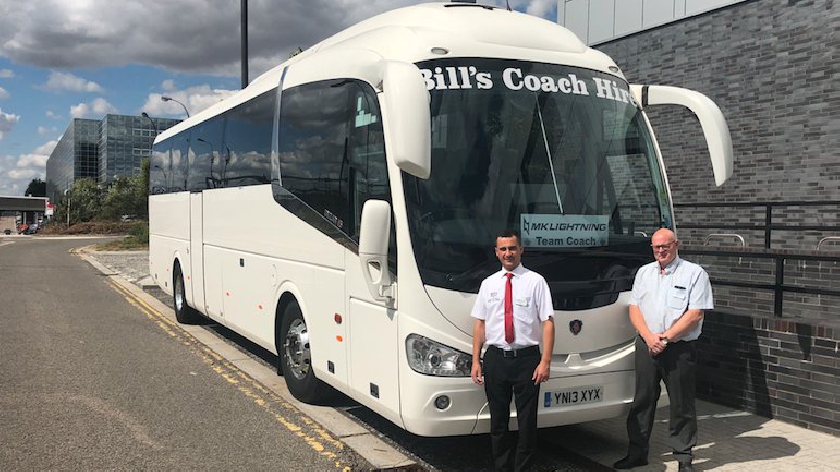 Milton Keynes Lightning have announced that local company Bill’s Minibus & Coach Hire Ltd will be the club’s official travel partner from the 2018/19 season.

In addition to transporting their team to many of their away fixtures this season, the company also has an agreement with the MK Lightning Supporters’ Club to provide travel for fans to many away games, commencing with the first league game against the Sheffield Steelers on Saturday 8th September.

Bill’s Minibus and Coach Hire will provide a dedicated vehicle and driver specifically for Lightning’s away fixtures, and the coach will have a display panel proudly proclaiming its status as the official team coach for the MK Lightning.

As part of the company’s agreement with MKL, their logo will be on a premium rink-side barrier board at the Planet Ice MK Arena.

Based in the Stacey Bushes area of Milton Keynes, Bills Coach Hire was formed in 2004 with a small premises and just two minibuses.

Owner Bill Legg, who runs the business with his son Ryan, said he has watched Ice hockey in Milton Keynes progress over the years and is delighted to now be backing them at a high level.

He commented: “When MK Kings were playing in the 90s I used to go to games and drive another family to home and away games when I ran my taxi business.”

“Since then my business has grown to what it is now where we transport hundreds of children to their schools every week as well as many other jobs.”

“I’ve watched Ice hockey in MK grow too, and I’m absolutely thrilled to now be the club’s official transport provider.”

“We’re looking forward to playing a part in Lightning’s success by getting them to their away games in comfort, ready to play!”

Supporters’ Club chairman Dave Bunyan said: “We’re extremely happy to be working with Bill’s Minibus and Coach Hire to provide transport for our fans to away games.”

“Lightning are well known for our fans travelling far and wide to cheer on the team, and hopefully now even more people can go to road games!”

“Bill’s company provides a fantastic service and we think fans will be excited to be using the same service as the players.”

MK Lightning’s Commercial Manager, Sarah Jane Smyth, commented: “This is more than just a sponsorship agreement - Bill’s will provide a personal service and really look after the team’s needs during away travel.”

“This is a local business that we are very proud to be partnering.  It’s incredibly important to us to work with local organisations and we hope this will be a long-term relationship that will grow, season after season.”