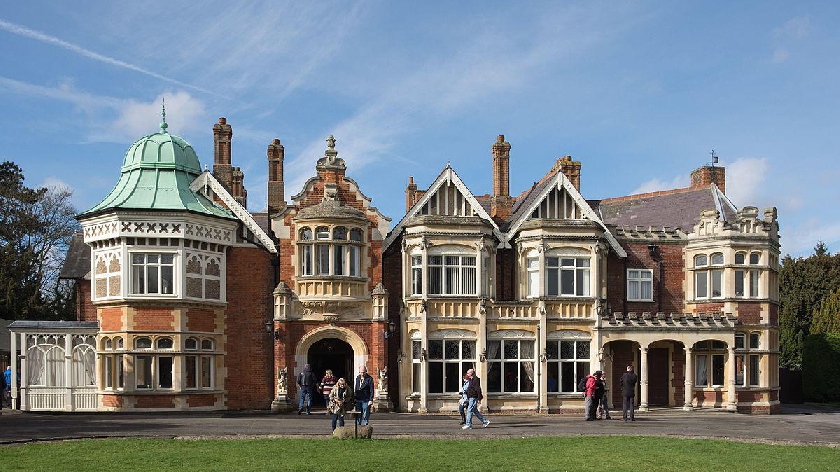 Featuring a specially commissioned film projected on a 22m screen, the audio-visual experience will run on site in the newly restored Teleprinter Building where hundreds of thousands of intercepted messages first arrived at Bletchley Park from secret listening posts across the UK, and ULTRA intelligence was transmitted to Allied headquarters.

- Direct examples of when BP intelligence altered the Allies invasion plans and helped to save lives.

- That on D-Day itself, enemy messages intercepted at Bletchley Park were being decrypted, translated and sent on as intelligence reports in under three hours. This gave the Allied Commanders invaluable insights into how the Germans were responding to the invasion.

- The existence of the top-secret Western Front Committee at Bletchley Park, formed in October 1942, who week by week patiently accrued intelligence on the German defences in France which directly impacted on the invasion plans.

- How vast the codebreaking operation was at Bletchley Park and its Outstations. By 1944 it had grown from an organisation employing a few hundred people in 1939 to an intelligence factory employing thousands of men and women working in shifts around the clock.

- The importance of the Codebreakers breakthroughs into Enigma, but also Lorenz and Japanese ciphers, both of which gave a unique insight into Hitler’s strategy for dealing with the ‘Second Front’.

- The race to build machinery to help decipher Lorenz messages that led to the development of Colossus, the world’s first large scale electronic digital computer.

Bletchley Park is delighted to have BT, whose wartime history is closely intertwined with the Codebreaking site, as the Sole and Exclusive Corporate Partner of the restoration of Teleprinter Building and the Exclusive and Sole Partner of the Exhibition. It was General Post Office (now BT) engineers who managed Bletchley Park’s secure communications network.

Iain Standen, CEO of Bletchley Park Trust says. “D-Day was one of the high points of the Bletchley Park story. 75 years after D-Day, this new experience will allow visitors to understand the vital role ULTRA intelligence played on the invasion plans.”

David Kenyon, Research Historian at Bletchley Park and author of Bletchley Park and D-Day (Yale University Press, 2019), says, “This exhibition portrays the vital link between the men and women at Bletchley Park, and their counterparts on the battlefield, and shows how good intelligence could make the difference on the beaches of Normandy between life and death, success and failure.”

David Hay, Head of Heritage and Archives at BT says, “As the world’s oldest telecommunications company we’ve always been an organisation with a clear purpose; which is to use the power of communications to make a better world. This was our focus as far back as 1846 when we were founded and is still our vision today.”

“The story of GPO engineers at Bletchley Park is a big part of our heritage in research and innovation, and we are immensely proud of how those engineers connected people and communities in ways not previously possible. The pioneering work of our former colleagues is a source of inspiration for BT people today and captures the spirit of innovation which is still at the heart of everything we do.”