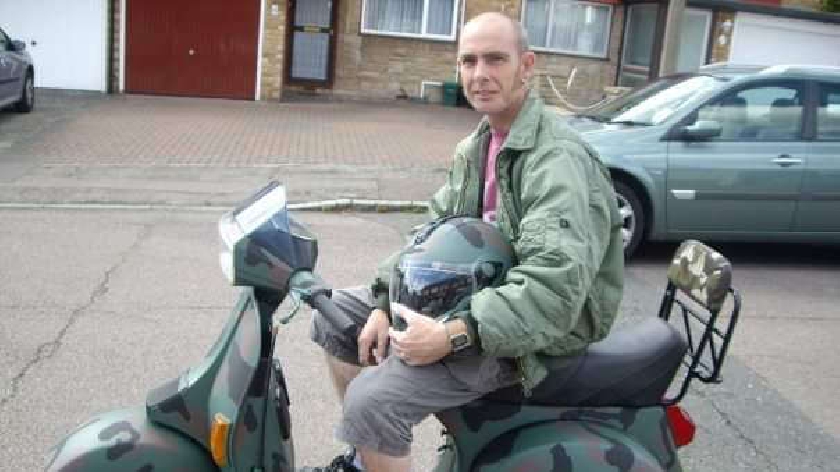 A man who was diagnosed with an aggressive brain tumour and given 12 to 18 months to live has written a collection of poems to help find a cure.

Paul King (known to his friends as Dixie) from Bletchley, Milton Keynes, has put together 57 poems into a book titled My Pensive Moods.

In the poems, Paul shares his thoughts and emotions during his battle with brain cancer and expressing his love for his wife, children and grandchildren.

Dixie hopes his work will help other cancer patients and their families while raising funds for national charity Brain Tumour Research, based in Shenley Wood, Milton Keynes.

Dixie, 55, a massive scooter enthusiast, was diagnosed with a glioblastoma multiforme (GBM) brain tumour in September 2019 after suffering what was initially thought to be a transient ischaemic attack (TIA) or mini stroke.

Whilst having tea, Dixie began to experience flashing lights in his left eye and tremors in his left hand. He lost coordination and couldn’t pick anything up.

After a visit to Milton Keynes University Hospital, it was revealed he actually had a brain tumour. He underwent neurosurgery at the John Radcliffe Hospital in Oxford, followed by radiotherapy and chemotherapy.

Dixie said: “After my treatment, my wife Jules and I started going away as much as we could to make memories, with Jules driving our camper van. Having undergone brain surgery, I wasn’t able to drive anymore, so we couldn’t go off on our scooters together, although I do ride pillion on the back of Jules’ scooters whenever I can.”

Devastatingly, for Dixie and his family, a regular scan earlier this year revealed more brain tumours and he underwent further surgery. Dixie is currently undergoing gruelling chemotherapy to help give him more time with his loved ones.

He added: “Knowing that my time was so limited, I started writing poems for Jules who is my soul-mate. We met on the internet in 2005 and discovered we had a shared passion for scooters and going away on scooter rallies.

"But we didn’t actually meet in person for six months. I proposed to her on the day we met and was ecstatic when she said yes! Since then, we have had 14 blissfully happy years together before I was diagnosed.

"I have dedicated poems to Jules and her daughters Lucy and Sophie (who I consider to be my children too), as well as our grandchildren (Lucy’s children: six-year-old Ella and Jake, three) and my dad.

“I hope that my poems will benefit other cancer patients who can’t or don’t know how to express their emotions and I hope that the sales of My Pensive Moods will help to raise vital funds for research into the biggest cancer killer of children and adults under the age of 40.

"The least I can do is give something back and hopefully help others who are struggling to let their loved ones know their inner-most feelings.”

Less than 12% of those diagnosed with a brain tumour survive beyond five years compared with an average of 50% across all cancers, yet historically just 1% of the national cancer spend has been allocated to researching the disease.

In the Foreword to My Pensive Moods, Sue Farrington Smith, MBE, chief executive of Brain Tumour Research, writes: “Dixie’s poems demonstrate real honesty and emotion, describing the daily battle of living with a brain tumour for both him and his wife and wider family.

"They are poems of love and bravery and a real tribute to Jules, who also now finds herself in the role of Dixie’s carer. We are so grateful to Dixie for generously gifting Brain Tumour Research with the proceeds from the sales of his book.”

It also campaigns for the Government and the larger cancer charities to invest more in research into brain tumours in order to speed up new treatments for patients and, ultimately, to find a cure.

The charity, who's head office is in Milton Keynes, is calling for a national annual spend of £35 million in order to improve survival rates and patient outcomes in line with other cancers such as breast cancer and leukaemia and is also campaigning for greater repurposing of drugs.