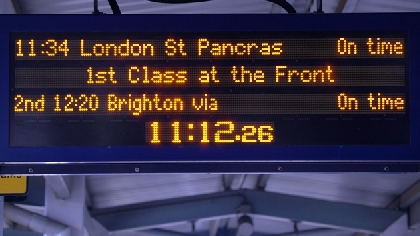 A power cut caused by fire next to the track near South Hampstead is causing major disruption to trains to and from London Euston.

Train services are being amended or cancelled, and no trains are currently able to run into or out of London Euston. Disruption is expected to continue until the end of the day. You are advised to travel via an alternative route where possible, or delay your journey until tomorrow.

London Overground services are suspended between Harrow & Wealdstone and London Euston. You may use Chiltern Railways, London Midland, London Buses, London Underground, Thameslink and Southern to help you complete your journey.

London Midland are advising customers to postpone journeys until tomorrow where possible. Your London Midland ticket will be accepted for travel tomorrow, 20 April. Or, if your journey is non-essential, please consider making alternative arrangements. You can use your ticket on East Midlands Trains between London and Wellingborough, Great Western Railway between Worcester and London, Chiltern Railways between London and Birmingham, Cross Country between Birmingham, Reading, Leicester and Derby,  Thameslink between London and Bedford and also London Buses between Zone 1 and Watford Junction and  National Express West Midlands buses on reasonable routes.

Virgin Trains customers are being advised not to travel south of Birmingham for the rest of today if possible. You can use your ticket to travel tomorrow instead (as near to your booked time as possible), or get a refund. Customers may use Chiltern Railways between London Marylebone and Birmingham Moor Street and also East Midlands Trains, Great Western Railway and Virgin Trains East Coast on reasonable routes. Customers may also use Northern between Wigan North Western / Sheffield and Manchester Piccadilly and TransPennine Express between Sheffield and Manchester Piccadilly.

You may be entitled to compensation if you experience a delay in completing your journey today. Please keep your train ticket and make a note of your journey, as both will be required to support any claim.