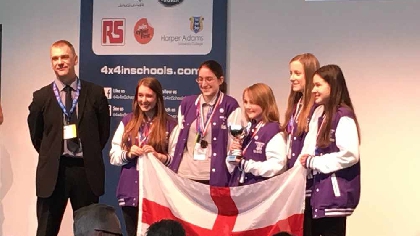 Denbigh School's all female engineering team have secured a place at the Technology in Schools World Championship in Abu Dhabi.

It comes after their all female team won the England Champions Award at the Land Rover 4x4 In Schools Technology Challenge National Final, which took place at Silverstone recently

As one of only four teams in the UK to get this opportunity, the students also won the Cyber Security Award, Team Identity Award and each received a robot kit for winning the Social Media competition.

The challenge for students was to build a 4x4 radio controlled vehicle that navigates and completes obstacles, emulating a full size 4x4 vehicle. Denbigh’s team of five sixth formers designed their vehicle to the specifications provided by the International Rules Committee.

The girls have been attending a weekly engineering club run at Denbigh School with engineers from Niftylift supporting the student’s pursuits.

Headteacher Andy Squires said “The students have given up many of their Friday afternoons and have really worked hard on their invention to achieve this impressive win. The opportunity for them to visit Abu Dhabi and compete to be the best in the world is something very few of us will ever get the chance to do. They will now continue to develop their design and pursue sponsorship for their once in a lifetime trip.”