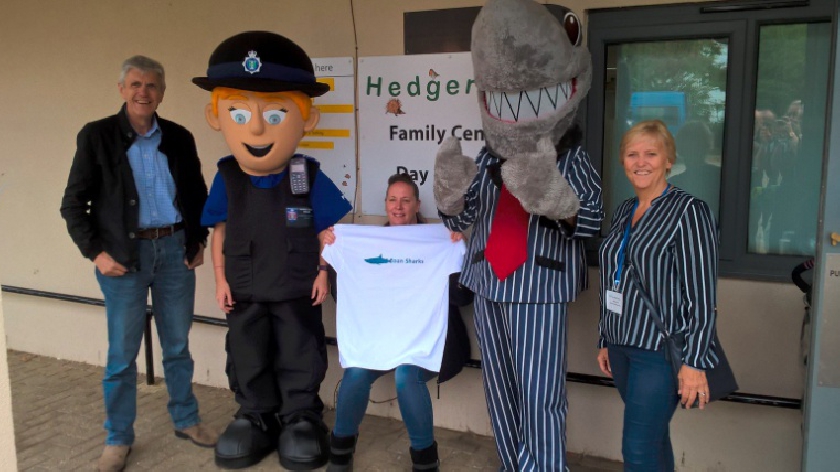 The ‘bite back’ campaign, running until Friday 17 August, involves a targeted leaflet drop, police training and a mini tour with IMLT mascot Sid the Shark and police mascot PCSO Peel.

Officers from the IMLT and Milton Keynes North Neighbourhood Policing Team took part in a targeted leaflet drop in Beanhill, Netherfield and Tinkers Bridge areas yesterday (Monday 13) to show residents the work being done and point to the help if needed.

Other work will include Police being trained on how to spot loan sharks and make referrals to the IMLT when dealing with vulnerable victims.

Sergeant Lucy Boddington, of the Milton Keynes North Neighbourhood Policing Team, said: “We are pleased to be working alongside the England Illegal Money Lending Team to raise awareness in our local communities of how to spot a loan shark, the dangers of using them and who to report them to. During the week of action, our neighbourhood teams will be visiting and providing information to a number of estates in Milton Keynes along with our police cadets."

"We will also be hosting a training session with frontline staff from our partner agencies, empowering them to safeguard and educate the most vulnerable in our communities."

Beer mats are also being used in local pubs to promote the IMLT victim helpline number to customers if they need advice and support with loan sharks.

Tony Quigley, Head of the Illegal Money Lending Team, added: “It is important that local people are made aware of the dangers posed by illegal money lenders. This campaign is about raising awareness of loan sharks and promoting safe borrowing."

“We want to remind residents that loan sharks may appear friendly at first, and make out that they’re offering a community service but borrowers are often forced to pay back far more than they have borrowed and can afford. Many victims are subjected to threats, violence and other callous settlement methods."

“We urge anyone who has been the victim of a loan shark to contact us in confidence on 0300 555 2222 and help us bring these unscrupulous lenders to justice.”

A loan shark is someone who runs a money lending business without the correct authorisation from the Financial Conduct Authority (FCA).

An estimated 310,000 households nationally are borrowing from illegal money lenders who charge exorbitant rates of interest to trap people into a spiral of debt.

Money confiscated from convicted loan sharks is also being used to back new credit union accounts in Milton Keynes.

Swan Credit Union, based at Foundation House on Aylesbury Street, is working with the England Illegal Money Lending Team (IMLT) to use proceeds of crime money as an incentive to encourage people in Milton Keynes to save, and to raise awareness of the dangers of borrowing from illegal money lenders.

Steve Eyre, Chair of the Swan Credit Union said: “Swan Credit Union exists to provide affordable savings and loans through our local Community Banks and we value very highly the work of the England Illegal Money Lending Team in tackling loan sharks. We recognise that this type of crime hits vulnerable people very hard, and using recovered proceeds to support the work of Credit Unions is imaginative and dynamic."

"I am confident our existing and potential members will be grateful for this support and will be encouraged to use the valuable services that we all provide.”

For more information on how to become a member of Swan Credit Union, call 03030 300147 or visit http://swancreditunion.org.uk/.

Nationally, Illegal Money Lending Teams have secured more than 380 prosecutions for illegal money lending and related activity, leading to nearly 329 years’ worth of custodial sentences. They have written off £73.7 million worth of illegal debt and helped over 28,000 people.