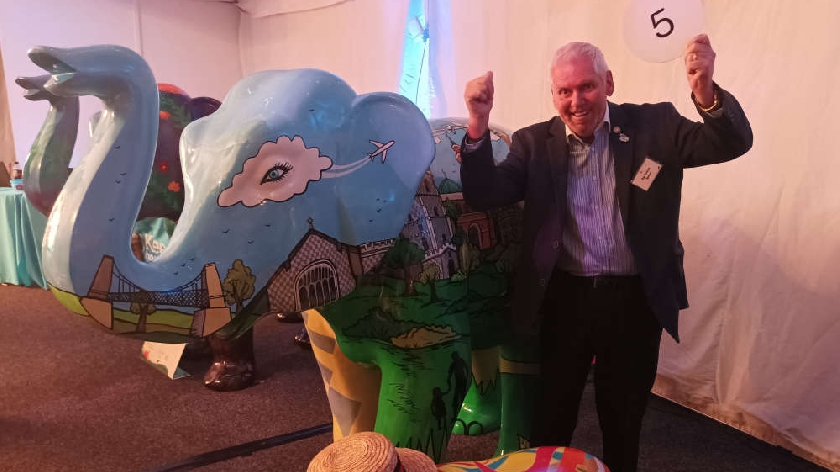 38 life-size elephant sculptures which featured in a spectacular, free, outdoor public art exhibit, The Big Trunk Trail, have been sold for a staggering £231,500.

Keech Hospice Care is a charity which supports children from Bedfordshire, Hertfordshire, and Milton Keynes, who have life-limiting and terminal illnesses.

Bidders battled it out for the colourful creatures at a gala event to raise money last night (11/11), led by TV celebrity auctioneer, Charles Hanson.

The highest price on the night was an astonishing £25,000 bid by Dunstable businessman, Alan Corkhill of Guideline Publications, who bought Unity, the first elephant to be decorated for the Trail.

Mr Corkhill also paid £4,800 for Flame, which his company also sponsored and which will now be put proudly on display at his office; £5,500 for Flypast which he hopes will live at London Luton Airport and £6,000 for mini-elephant Peanut who he intends to give back to Keech Hospice Care.

He said: “Hospices should never have to say thank you should they, so I was just delighted to be able to give them a bit of support.”

Charles Hanson was thrilled with how well the auction went.  “The explosion of joy in the room, the love people so clearly have for Keech Hospice Care, the incredible sense of unity; it was so amazing to be here.  Every auctioneer wants theatre, drama and romance to make the perfect night, and that’s exactly what we had tonight.”

Other elephants that went under the hammer included one painted for Milton Keynes-based Bake Off star, Nadiya Hussain and one for the Captain Tom Moore Foundation which went for £4,000 and £12,000 respectively.

The charity’s CEO, Liz Searle said:“We set up the Big Trunk Trail to celebrate our thirtieth year and to say thank you to the people of the area for their support over three decades. The people who’ve dug so deep to buy their elephants tonight have paid back in spades both to us and the public we serve.  Thank you to all of them.”