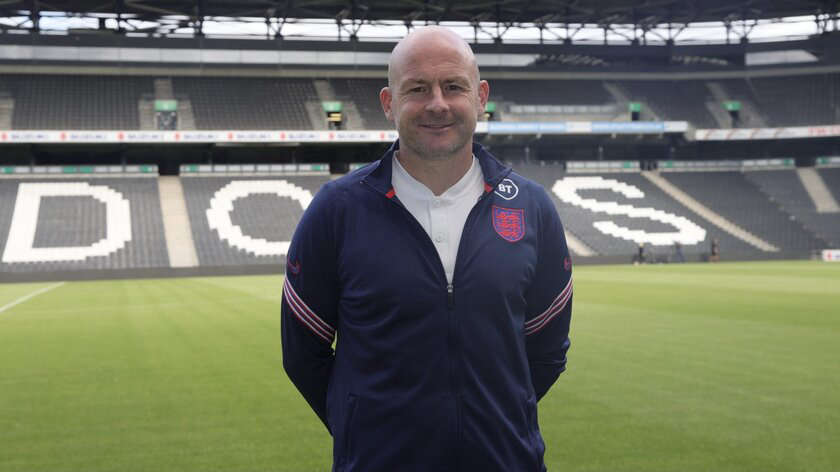 England MU21s manager Lee Carsley is looking forward to managing his first game with the side at Stadium MK next month.

The Young Lions are set to play Kosovo MU21s in a qualifying match for the 2023 UEFA European Championships, with the home ground of Milton Keynes Dons playing host that night.

Carsley, who took over from the departing Aidy Bothroyd after five years at the helm, will take charge of the team for the very first time in the match.

He spoke exclusively to MKFM ahead of the fixture, and is looking forward to getting things started in Milton Keynes.

He commented: "Can't wait. It was good to come to MK today and have a look around the stadium, a stadium that I've been to a few times now."

"I've been in it before when it's been full at games so hopefully we can generate a good crowd and a good atmosphere for when the team come."

"If you look at the pitch, it's an outstanding pitch, and the last time I was here especially I remember Callum [Brittain] scoring a good goal from a corner and we broke and scored up the other end."

He added: "So yeah, looking forward to hopefully generating a bit of interest in the area. Good for the younger fans to come and see the future internationals hopefully."

Carsley had previously been in charge of the England MU20s side, taking the role last September before transitioning into his new role, but was only able to take charge of two matches during that spell - a 2-0 victory over Wales MU20s and a 3-1 defeat against an Aston Villa U20s side.

With such a small sample size in international management, Carsley spoke about what fans can expect to see out of the team under his stewardship.

He explained: "Hopefully I can continue the good works that's going on in the pathway."

"We try and go away from the coach's style and play is almost what the England DNA is.

"So, I'm hoping that I can create a good atmosphere in the squad, a good environment, and create a platform that players can perform well on."

He continued: "We've got some outstanding players in the pathway so hopefully they can perform on the night for us."

Carsley's appointment as manager of the Young Lions came just weeks after the excitement and hope that the senior England squad provided the country in the Euros.

Many of the players that featured for Gareth Southgate's side during the tournament were in their early 20s and had progressed through the youth international ranks, something that Carsley is hoping to continue to build on in his new role.

He explained: "It was inspiring in the summer seeing the England team and seeing not only them on the pitch but the impact it has off the pitch with the nation in general."

"We're looking to continue that momentum with hopefully showing the MK crowd what the next generation of England players can do."

He concluded: "There will be some really exciting players on show, on the night, we've got a lot of good players within the pathway that we've got access to so hopefully we can pick the right squad."