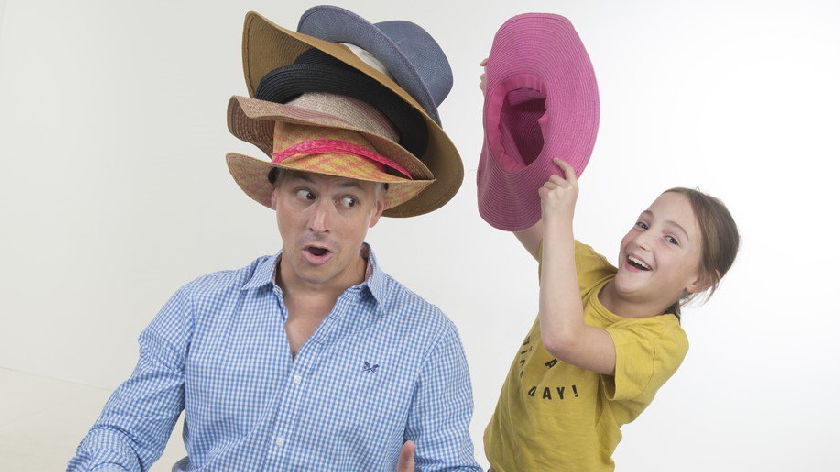 The family of local radio presenter Helen Legh are starring in Brain Tumour Research’s Wear A Hat Day campaign for 2020.

Paul Green and daughter Matilda will feature in the campaign as they know the devastation of a brain tumour diagnosis and are sharing their story in the hope of finding a cure.

Helen Legh's career encompassed a variety of radio stations across the UK including Horizon Radio, Virgin Radio, and MKFM. She presented the BBC Three Counties Morning MK breakfast show from 2007 to 2012 and Sunday Breakfast until 2018.

Helen and husband Paul Green had tried for a baby for a while and finally, after three cycles of IVF, Matilda was born prematurely at 25 weeks. She was four years old when, in October 2014, her mum was diagnosed with a glioblastoma multiforme (GBM) brain tumour. She was given a survival prognosis of 14 to 16 months.

Helen worked with Milton Keynes-based charity Brain Tumour Research to raise awareness and in 2015 told the charity: “Even my worst fears hadn’t prepared me for this. I immediately thought of my Matilda, then just four years old, who had only recently started at school. How long was she going to have a Mummy? I was so sad to think how I was never going to see her grow up, or get married, how I was never going to be a granny. And more to the point, how were she and her daddy going to cope when I died?”

Helen underwent surgery four times, including three awake craniotomies, as well as chemotherapy and radiotherapy treatment, but nothing could save her. She passed away aged 44 in June 2019, four and a half years after diagnosis.

Now her grieving family are sharing their story and their images are being seen across the country as the marketing campaign is launched for Brain Tumour Awareness Month in March. The month culminates in Wear A Hat Day on Friday 27 March. Now in its 11th year, Wear A Hat Day has raised more than £1.25 million to help fund the fight against the disease.

Taking part in the campaign are Helen’s husband, Paul Green, 45, and their daughter Matilda, now nine, who live in Aspley Guise.

Paul said: “After the awake craniotomy and subsequent radiotherapy and chemotherapy in 2015, I like to think of 2016 and 2017 as Helen’s golden years. She had no treatment and no reoccurrence and even managed to get her driving licence back for six months. Helen threw herself back into being a mum, a wife and a radio presenter.

“However, in early 2018 a scan revealed new growth. Following surgery, more radiotherapy and chemotherapy, I stopped being just Helen’s husband, and became her carer as well.

“Later the same year, Helen underwent yet another operation for further growth. If I had my time again, I would have tried to persuade Helen not to have this final surgery, even if it meant that she would have died a few months earlier than she did. The last few months and days were so cruel for Helen and for our family and friends as she lost all mobility and eventually the ability even to communicate. It was especially horrible to put Matilda through this.

“The only way we can bring about better outcomes for brain tumour patients is through investing more in research. I hope by helping to raise awareness, I am doing my bit to bring forward the day when a cure is found and families will no longer hear that a loved one has been handed a death sentence, like mine did.”

Brain tumours kill more children and adults under the age of 40 than any other cancer yet, historically, just 1% of the national spend on cancer research has been allocated to this devastating disease. Brain Tumour Research is the only national charity in the UK singularly focused on finding a cure for brain tumours through campaigning for an increase in the national investment into research to £35 million per year. It is also fundraising to create a sustainable network of brain tumour research centres in the UK.

This year the focus is on the devastation the disease causes to families. All those taking part in the Wear A Hat Day 2020 campaign have been bereaved by a brain tumour, are living with a brain tumour, or have a close family member who has been diagnosed. Some families have three generations involved and all are donning their best headwear from beanies to cowboy hats, trilbies to Panamas, baseball caps to novelty headpieces, and are asking others to join them for this year’s event.

Brain Tumour Research patron, the supermodel and entrepreneur Caprice Bourret is once again backing Wear A Hat Day and, this year is joined by television presenter and mathematician Rachel Riley, broadcaster and DJ Jo Whiley and fashion designer Patrick Grant from TV’s The Great British Sewing Bee. Among corporate supporters already signed up for the fundraiser are Venture Studios – which worked with the families to create the stunning portraits used in the campaign – and Hobbycraft.

Sue Farrington Smith MBE, Chief Executive of Brain Tumour Research, said: “My heart goes out to Paul and Matilda; sadly, they are not alone. Some 5,500 families in the UK are given the same awful news each year, yet there is still a paucity of treatments for brain tumour patients; 20 years on, lives continue to be devastated.

“Less than 20% of patients survive beyond five years of their diagnosis whereas for cancers such as breast and leukaemia the figures are 86% and 51% respectively because of greater investment for research in those areas.

“Unlike many other cancers, brain tumours are indiscriminate. They can affect anyone at any time, regardless of age, gender, race or lifestyle. Too little is known about the causes and that is why increased investment in research is vital if we are to improve outcomes for patients and, ultimately, find a cure.”

Brain Tumour Research funds sustainable research at dedicated centres in the UK. It also campaigns for the Government and the larger cancer charities to invest more in research into brain tumours in order to speed up new treatments for patients and, ultimately, to find a cure.

You can register to take part at www.wearahatday.org. Alternatively, text "HAT" to 70450 to donate £5.