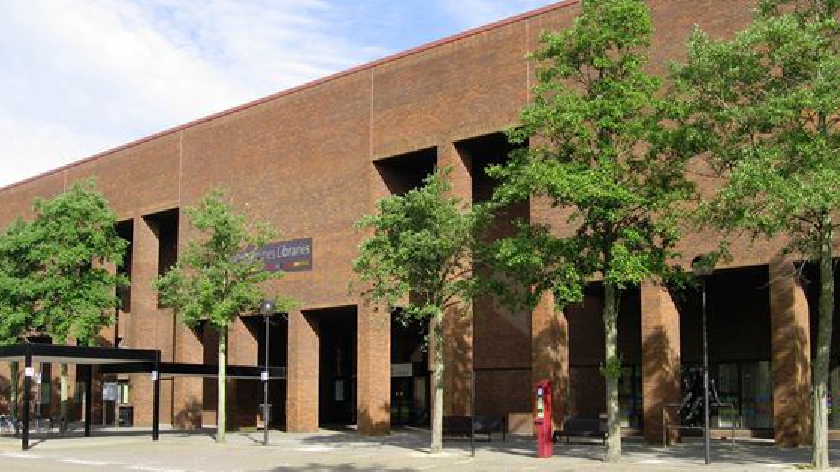 The iconic building on Silbury Boulevard covers 2,816 square metres across two floors and houses more than 188,000 books and 12,500 digital titles.

The lending library on the top floor is open for visitors to browse and borrow books and audiobooks, collect reservations and make use of the study space and public computers.

To mark the occasion, a new artwork is being commissioned which will be installed next year.

Over four decades, Central Library has been visited by many writers, artists and celebrities and has housed art installations and projects, concerts and theatre productions. In 2019, the library welcomed the Robotazia Exhibition, which allowed visitors to interact with a range of robots including a robot waitress.

Cllr Zoe Nolan, Cabinet Member for Children and Families, said: “We’re really proud to mark 40 years since Central Library first opened its doors.  I love this library which has been so important to generations of families in Milton Keynes.

"In the early nineties, Central Library was the busiest library in the country and continues to support our residents, schools and businesses today. Whilst the building has changed very little, the service has evolved to offer digital titles and access to technology that not everyone can find at home.”

In 2015, Central Library was granted Grade II listing thanks to its architectural design. The library also contains a diverse collection of artwork including the bronze sculpture ‘The Whisper’, by André Wallace, Boyd and Evans’ large mural painting ‘Fiction, Non-Fiction and Reference’ and Csáky’s stainless steel geometric ‘Mirror Sculpture’, which is suspended from the ceiling of the children’s library.

In addition, a 15-foot-long sea reptile forms a centrepiece at the Reference Library as Milton Keynes’ oldest resident, the Big Eye monster. The famous Ichthyosaur lived about 160 million years ago, and its skeleton was discovered during the excavation of the Caldecotte Lake in 1982.

Throughout the pandemic, Milton Keynes Central Library has continued to serve the community as a Food Bank and a Testing Centre. Digital books, newspapers and other online resources have remained popular. From 1 April 2020 to 31 March 2021, MK library customers borrowed over 100,000 physical books, 35,000 digital books, and read over 130,000 digital newspapers.