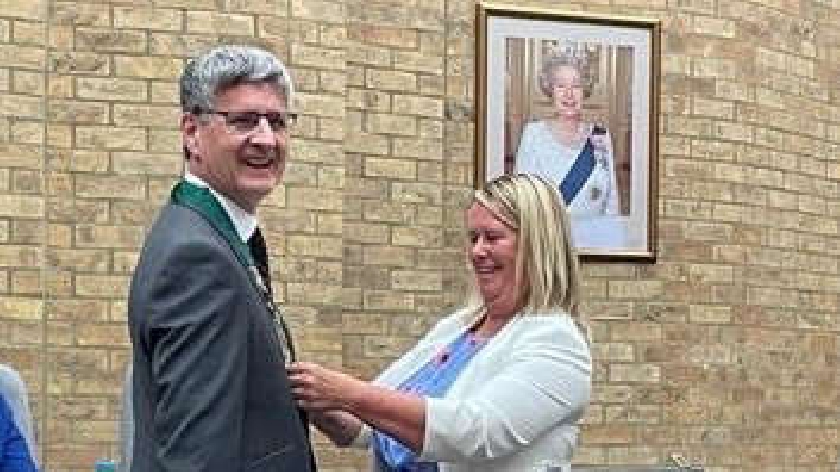 Labour Councillor Mick Legg has been announced as the Milton Keynes Deputy Mayor for this year.

Cllr Mick Legg has served on Milton Keynes Council since 1996. He was also the first elected to represent the residents of Denbigh Ward.

Since then, Councillor Legg has also served the residents of Bletchley & Fenny Stratford Ward and now represents Bletchley West.

He took a four-year break from the Council in 2008-2012 but still remains one of the longest serving councillors. Councillor Legg has served as Cabinet Member twice, first in the early 2000s and then in 2014.

His commitment also extends to the Council’s committees, having served as Chair of Licensing & Regulatory Committee (2020/21) and Development Control & Planning Committee (since May 2021).

During June’s meeting of Full Council, Councillor Legg was presented with the Deputy Mayor’s civic regalia and his wife, Mandy Legg, was announced as Deputy Mayoress.

Councillor Legg has said he is “filled with pride” after becoming Deputy Mayor, adding: “Milton Keynes is my home and I’m proud of how unique and forward thinking this city truly is. Throughout the years I’ve been heavily involved with projects such as Plan:MK, and I’m now looking forward to meeting more of the city’s residents and attending events with the Mayor of Milton Keynes Councillor Marlow.”

Councillor Pete Marland, Leader of the MK Labour Group, added: “Councillor Legg is Bletchley through and through. He has worked incredibly hard for Milton Keynes and its residents over the years, and has thoroughly enjoyed doing so. Councillor Legg will serve this city with honour, distinction and will be a brilliant Deputy Mayor.”