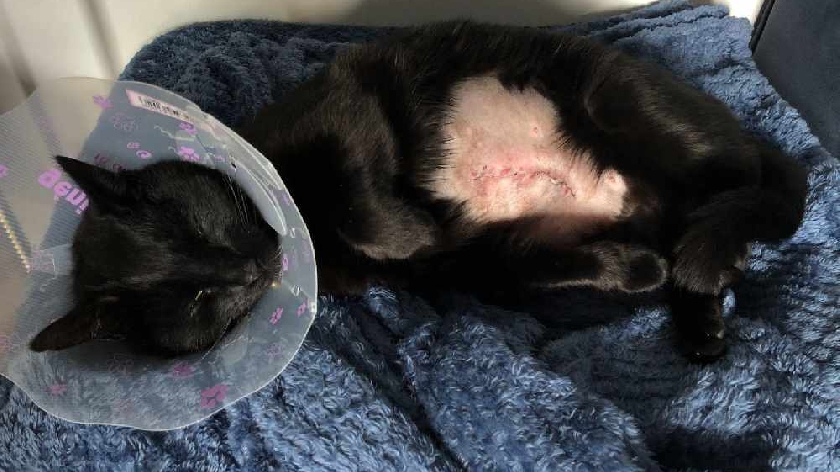 A local family's cat, called Myrtle, has miraculously survived after being shot by somebody using an airgun in Furzton.

Myrtle’s owners said that on the day in question, she had come home later than normal and hid under the bed and wouldn’t let anyone near her.

Concerned something was wrong, the family took her to a local vet for examination where it was discovered she had a puncture wound. X-rays were taken and it was revealed she had an air gun pellet lodged in her kidney fat.

The x-ray showed that the air gun pellet had only just missed a number of her vital organs and her spine. The pellet had become lodged in her kidney fat and could not be safely removed - the vets said that during the operation, removing the pellet was likely to cause more harm so it has been left.

However, despite her horrific injuries three-year-old Myrtle continues to make a good recovery.

Myrtle spent time recovering at the surgery and has since been allowed home where she is being cared for by her owners, and she has been reunited with her brother.

Her devastated owners now want to warn other cat owners in the area. They have also contacted the RSPCA, which has since launched an investigation.

Inspector Malwina Gasiorek who is investigating the incident said: “It is heart-breaking to hear what happened to poor Myrtle. She was very lucky to have survived. This was a callous and cruel attack on a helpless and defenceless animal and has caused her a lot of suffering.

“I am investigating this and would urge anyone with information to call the inspectorate appeal line on 0300 123 8018.”

The RSPCA receives almost 1,000 calls to investigate such cases every year and sadly cats and wildlife are usually the animals most often affected.

A spokesperson for the RSPCA added: "We are calling for tighter controls on air weapons. This, along with better education and explanation of the law when buying an air gun, and requirements that everyone must receive basic safety training before being allowed to walk out of the shop could help relieve the problem.

"These weapons cause horrific pain and suffering and it is illegal. Anyone caught deliberately using an air gun to injure an animal can face up to six months in prison and/or an unlimited fine if found guilty under the Animal Welfare Act."