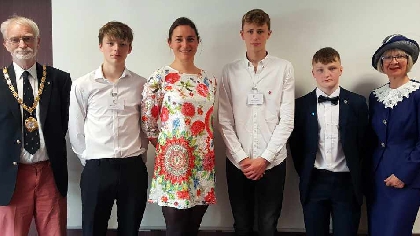 Milton Keynes Community Foundation is proud to partner with SportsAid Eastern to award 4 local sports stars with bursaries of £2,000!

The presentation took place at Jurys Inn on 18th May at the MK Sporting Lunch. The winners were thrilled to be joined by Dame Sarah Storey, Paralympic multiple Gold medal winner in both cycling and swimming. The bursary money can be essential and is often used to contribute towards costs such as competition fees, coaching, purchasing new equipment and travel expenses.

The first bursary winner is Jack Leahy, a 15-year-old Gymnast Tumbler. Jack has a fantastic record of accomplishment including being British No.2 and Home Nations No.1 in his age group. Last year Jack came 1st in Scalabis Cup and 2nd in both the British Championships and the World Age Group Championships!
This year Jack fulfilled an ambition of winning Gold at the European Championships! He hopes to use the bursary to help pay for training fees, competitions and accommodation travel expenses.

Next up is Ethan Van Leeuwen, a 17-year-old Badminton player. Ethan is currently in the England Junior Programme and trains at The National Badminton Centre on a daily basis as part of a group of Junior Programme players. He also trains at the Milton Keynes Badminton Academy where he started as a 7-year-old. Ethan is currently the U19 Doubles British No.1 and U19 Singles British No.3 and Mixed Doubles No.2 Last year he took part in the U17 European Junior Championships, reaching the final of the doubles, winning a Silver medal, as well as helping England win Bronze in the team event. This year Ethan has also reached his first semi-final at a Senior International (in Iceland) in mixed doubles. He has also reached quarterfinals of U19 Internationals in boys and mixed doubles at Bulgarian and Belgian Junior. His most recent success was winning the Croatian Open doubles title just 3 weeks ago.

Ethan is hoping to be selected for U19 World Juniors in Canada and U19 European Championships in Latvia, gaining valuable experience and helping his transition into Senior badminton.  Ethan’s ambition is to gain a medal at the Olympics. Ethan says, “At my age, it’s crucial to start playing more international events. Due to Badminton England funding cuts, they now have limited resources to support us. I will use the bursary to cover some of the costs of playing at this level."

Alfie Yabsley, our third sports bursary winner is an 18-year-old athlete ranked British No.1 in U20 2,000m Steeplechase event. Alfie’s recently been selected to run the 3,000m steeplechase for Great Britain’s Junior team at Loughborough International. Alfie’s ambition is to become a World and Olympic Champion over a range of distance events, as well as having a long and healthy career and to put athletics on the map.

The athletics governing report commented, “Alfie is a developing athlete, with continued application he should make age-group international teams over the next 2-3 years and has the potential to make senior teams within 4-6 years.”

“I will use the bursary to cover the costs of travel associated with competing at this level. I'm still in full-time education and find it very difficult to fit in part-time work without it interfering with my athletics.” Alfie Yabsley. Alfie hopes to compete in the 2018 IAAF World U20 Championships for the 3000m this year.

Lisa Curtin, a 13-year-old Badminton player is currently a member of the England Junior Performance Programme. Lisa has won a total of 8 national titles and 8 international titles to date. During the last 12 months Lisa has had some notable successes; she was selected to play in the Junior Quadrangular held in Ireland, winning gold in the team event,  gold in the doubles and reached the final in both singles and mixed doubles at the same tournament and being 1-2 years younger than most of the opposition. Internationally, she has also won the doubles event at the U15 Langenfeld Cup in Germany, won Gold in the U15 Finnish Junior winning the singles event two years running and won Silver in both U15 singles and doubles in Hoensbroek in Holland. Lisa was selected to play for England at U15 8 nations winning team bronze and reached the semi-finals in the doubles.

Domestically Lisa is currently a top singles player in the age group; winning two U15 gold titles and reaching the final of another 2 U17 golds.  She has also reached the semi-finals of the U17 Gold in Doubles this year. In February Lisa was selected to play singles and doubles at the European U15 Championships held in Russia. Lisa won Silver in singles beating tough seeded players along the way.

Unfortunately, Lisa could not play in U15 and U17 nationals in April this year due to injury. Lisa is now back on court training and is looking forward to playing in the U15 Glasgow International shortly. Lisa says, “I want to win a junior national title at each age group throughout my junior career…to represent England at the Olympics and medal."

Mark Ormerod, the regional Chair of SportsAid says, “As a National charity, we really value the partnership we have locally with Milton Keynes Community Foundation. Together we ensure that the bursaries are awarded to the most talented local youngsters as identified by their governing bodies.”

MK Community Foundation and SportsAid Eastern would like to wish all four bursary winners every success with their sporting career!