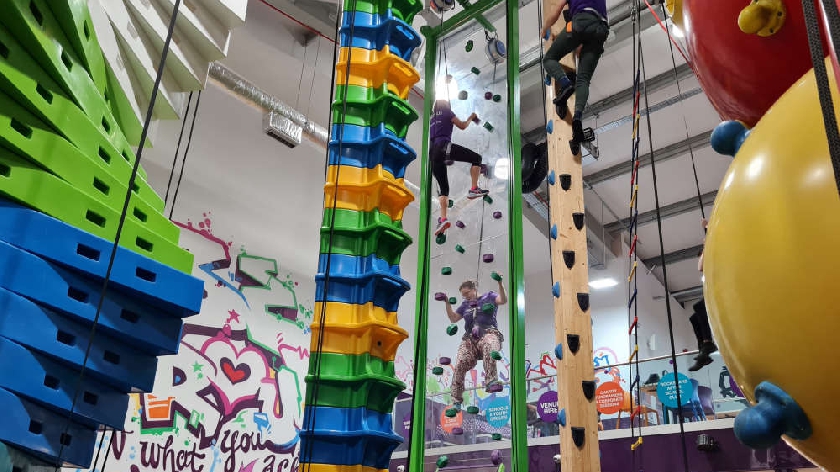 Teams from Allica Bank, Franklins Solicitors, MacIntyre and MacIntyre No Limits faced their fears, gritted their teeth and scaled 168 brightly coloured walls of varying difficulties.  All teams managed to reach the equivalent of the height of Ben Nevis (1,344m).  Only having one hour to complete the challenge meant participants’ had to dig deep, racing up and down walls with no time to rest.  The sense of achievement was clear to see on all participants faces. Congratulations to the No Limits team who reached the summit in the fastest time.

Tim from Franklins Solicitors proved to be the quickest climber of the evening beating his colleague Simon in an exciting head to head battle at the end of the night!

Tim Dawson Franklins Solicitors said, ‘I really enjoyed the Clip ‘n’ Climb evening. Franklins is a big supporter of the MacIntyre charity and it was great to do something fun, while raising money for such a worthy cause. Winning the award for fastest climber was the icing on the cake!’

Over one thousand pounds was raised for MacIntyre a national charity that provides learning, support and care for more than 1,200 children, young people and adults who have a learning disability and/or autism, across England and Wales.

Chris Walthew Owner Climb Quest Milton Keynes said, ‘It was a thrill hosting MacIntyre for our Climb Quest Ben Nevis Challenge, which is the first fundraising event we have run since opening. Not only did the teams raise money for a fantastic cause, you could tell everyone had an amazing time, challenging themselves on the walls, and also coming together to work as a team, which has been so challenging over the last 20 months.’

MacIntyre receive funding to provide for core areas of care for people with learning disabilities. However, it is the 'extras' made possible by fundraising that can lead to new experiences and cherished memories for the children, young people and adults MacIntyre supports.

“MacIntyre is delighted that the first Climb Quest Ben Nevis challenge was such a success.   The atmosphere was electric with teams pushing themselves to their physical limits to reach the summit in only one hour! We would like to thank Allica Bank, Franklins Solicitors and Climb Quest for a fantastic evening and raising much needed funds for MacIntyre.”

Find out more about the work MacIntyre do in the local community here.