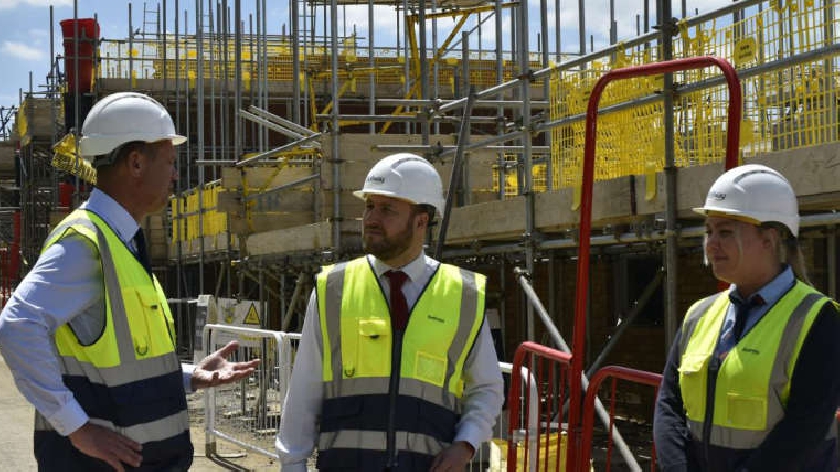 Just under 500 of these new homes are affordable.

Milton Keynes Council has unveiled its ‘ambitious and innovative’ plan for the City of Milton Keynes, in its draft Council Plan for 2022-2026.

In this plan includes 'high-quality placemaking and well-planned growth' and 'improved access to affordable housing'.

Leader of MK Council, Cllr Pete Marland visited the Wavendon Chase development where Bellway is currently building 168 new homes. The development will include new schools, shops, a health centre and public open space, and is expected to be completed later this year.

Leader of MK Council, Cllr Pete Marland said: “These are strong numbers and put us in a good position as we continue to grow our city. Meeting these targets is really important as it protects Milton Keynes from speculative developments that can happen when targets aren’t met and helps us deliver the homes that families actually need. Hitting our targets is just the start, we’ll keep pushing for more affordable homes to be built that are in line with people’s income.”

Paul Smits, Managing Director of Bellway Northern Home Counties said: “It was very fitting to welcome council leader Pete Marland to our Wavendon Chase and Wavendon View developments on Tuesday 14 June along with representation from both Milton Keynes council and Bellway Northern Home Counties, to celebrate the council’s housing target being achieved for the fourth year in succession.

“As a local developer based in Milton Keynes, Bellway Northern Home Counties is proud to continue delivering new housing in the area, as well as across our region, to supply brand new homes to our customers and to support the communities in which we build for the future.

“We were able to show Pete around our two developments in Wavendon, which has formed a significant part of the council’s housing supply in recent years, and we thank Pete for his time.”