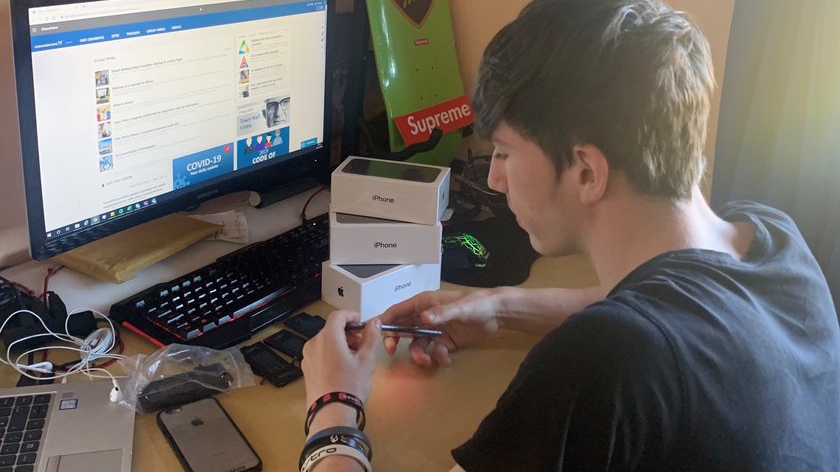 When Milton Keynes College apprentice Matt Heaney took on an apprenticeship at Grundfos Pumps, he probably never dreamt he’d be keeping his colleagues connected during a global pandemic.

Company employees are more dependent than ever on their laptops and smartphones and if they get broken, they could be completely out of touch until replacement hardware can be found.

Matt has been working on retired machines, bringing them up to spec and back onto the company system as readymade replacements when the worst does happen.

“It might be that someone’s dropped a phone and the screen’s destroyed or they’ve smashed the keyboard on a laptop,” he says.  “If we can’t get a replacement out to them quickly they won’t be able to work.  Having older equipment ready to go means they can be up and running again in no time.”

The near-global shutdown has meant getting spare parts, especially those made in China, is increasingly difficult.  Those which are available online are rocketing in price so Matt’s electronic version of make do and mend is even more significant.

Support Engineer Analyst, Roy Clapham, is Matt’s boss at the company and he’s due for retirement soon so wants to teach Matt all he can so he can take over from him when the time comes.

He explained: “When we interviewed him you could tell he could handle a curveball or two.  He’s a quick learner and I’m really pleased to be able to share with him the knowledge I’ve built up over the last thirty years or so.”

Roy believes the current crisis may have some positive permanent impacts on the way we all do business.

He said: "People are learning that they don’t have to travel three hours each way for a two-hour meeting but can do it online instead."

"Face-to-face meetings are just a waste of planetary resources when it can all be done online.  Maybe it takes a big upheaval like this for people to see the sense of it."

Roy says the apprenticeship partnership with the College works well.  “He goes into College on Mondays and we have meetings with his tutor every few weeks.  It means that his classroom learning and learning on the job knit well together with each feeding into the other.”

Matt says he’s really enjoying the mix of classroom work and earning while you learn, commenting: “I would happily recommend an apprenticeship to anyone.”

“It’s great to be able to apply the knowledge I pick up in lessons in a real-life situation and the academic side seems so much more worthwhile because it has immediate practical use.”