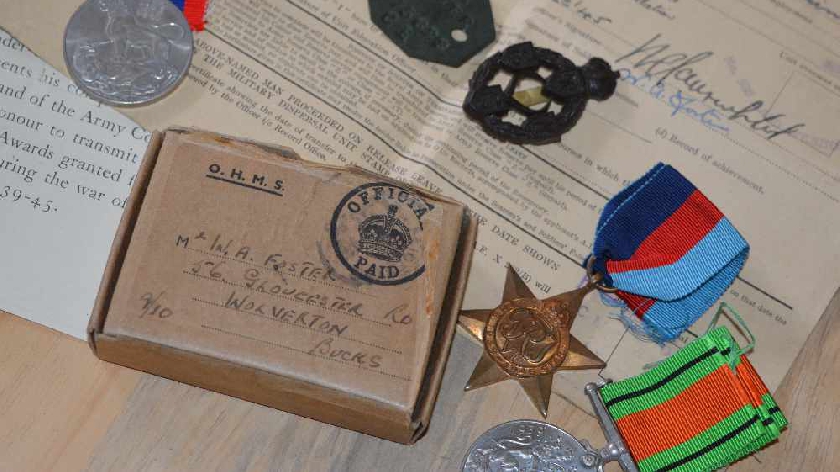 When WWII medals belonging to a Wolverton man were spotted for sale online, caring residents clubbed together to buy them back for the town – and donated them to Milton Keynes Museum.

The medals had been issued to William Foster for his service during the Second World War.

Vince Clinton is a member of the 'I grew up in Wolverton' Facebook group, and when details of the medals were shared, he decided to jump into action and split with the cash to buy them.

He said: “This seemed to be a complete set of medals, cap badges, ID tag and paperwork and I thought it was important that the medals remain in the town.”

But Vince wasn't the only one who wanted to see the medals brought home - he received offers of donations from other residents, including two of his school friends and from one of the FB page administrators. A lady who grew up in the town but now resides in New York even stepped up with a contribution!

Mr Foster lived with his wife in Gloucester Road, and is believed to have worked as a coach painter in the Works.

A few locals still remember them as a quiet couple who 'kept themselves to themselves'.

It isn't believed they had any children, and how these precious medals ended up on Ebay isn't known.

Vince is currently carrying out research to find more information out about Mr Foster, but he is thrilled that with the help of other Wolvertonians he was able to bring Mr Foster's medals home where they belong.

“With the clear connection to Wolverton and the Works, due to Bill's profession, and the fact that there was no evidence of next of kin, I thought it would be a fitting tribute to his memory and service that they be donated for display at the Museum,” he said.

“We are so pleased to receive these,” Bill said, “They are an important part of local history and are now back in their rightful place – here in the town where Mr Foster lived and worked.

“We are sure he would be thrilled to know that his precious medals have been returned 'home,' and we extend our gratitude to Vince and all those who donated to help secure them - and have entrusted them to us for safekeeping.”