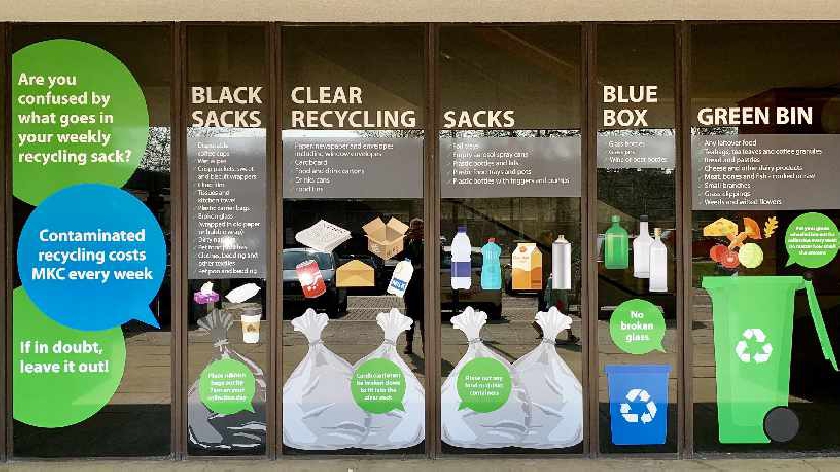 A council has appealed to its residents to help dig it out of a hole that could continue to cost hundreds of thousands of pounds more after an historic blunder in its recycling contract.

At meetings held behind closed doors last week Milton Keynes Council and contractor Viridor agreed to a £1.75m legal settlement to cover the costs of the wrong kind of rubbish in recycling sacks from 2013 to 2019.

It had been feared that the settlement could have blown a £3million hole in the council’s already tight budgets. The council says this figure has been negotiated down, but it is still liable for ‘hundreds of thousands of pounds’ in penalty fees every year.

Initial estimates that only 10 per cent of rubbish placed in the recycling sacks would be wrong proved to be wildly inaccurate. Residents have been placing so many tons of used nappies, and crisp packets in their clear sacks that one in every four of them has been rendered unusable.
Milton Keynes’s recycling is processed by a mixture of mechanical and human hand methods by Viridor staff at the Materials Recovery Facility, in Wolverton. Any materials that can be reused are recovered and sold. At the same time as seeing high levels of contamination, the market for recycled materials has dropped.

In a statement, Milton Keynes Council said: “Around one in four sacks in MK are contaminated by dirty nappies, pet waste, and food so materials can’t be recovered, undermining recycling efforts. This is higher than the tolerance for contamination built into the recycling contract.
“If contamination levels continue at their current levels, it will cost MK hundreds of thousands of pounds every year in penalty fees.”
The council has appealed to residents to “take more care about what they put in recycling sacks to avoid unnecessary future costs” and they will be looking at ways to get that message out more effectively.

Cllr Ric Brackenbury, who chairs the council’s scrutiny management committee, says, “The council was asleep for too long on rising contamination levels in recycling. There’s a big job to do to make sure we keep recycling but only put the right items in our recycling sacks.”
People can find out what can and can’t be recycled at www.milton-keynes.gov.uk/waste-recycling