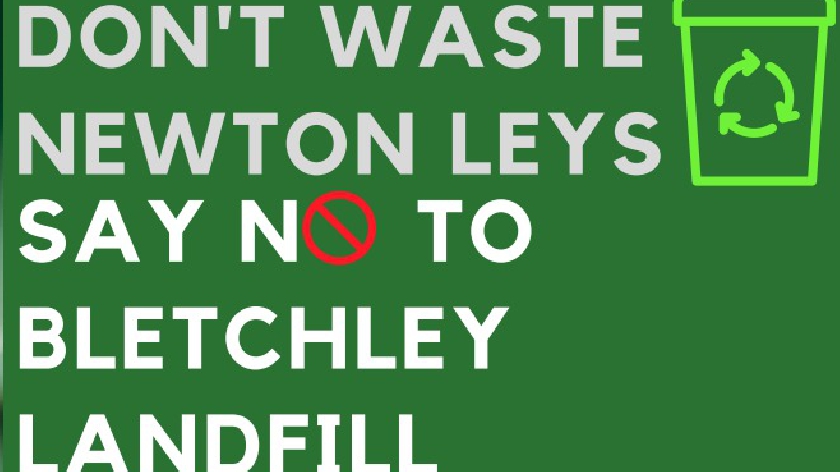 A councillor who was ‘trolled’ on Facebook over opposition to a landfill site has called for opponents to be ‘evangelical’ about making their case.

A group called Say No To Bletchley Landfill is building up a head of steam to support a Milton Keynes Council bid to force operators FCC Environment (FCC) to close the massive site.

“This morning I got trolled by someone in MK3 Bletchley chit chat,” said Cllr Ethan Kelly-Wilson, who represents the Newton Leys ward on Bletchley and Fenny Stratford Town Council.

“They said the landfill came first and Newton Leys should just put up with it.”

And in a campaign meeting on Friday where he called for opponents to be evangelical with a range of arguments, he added: “Do we have to keep filling that hole forever? We want something better.”

A resident at the meeting also spoke of a division among residents on the community Facebook page, between those on the Aylesbury Vale side and others who say it is “not an issue for us.”

“It needs more of a consensus,” she added.

Milton Keynes borough councillors at the meeting called for residents to supply evidence to the Planning Inspectorate on how the site affects them.

A Government inspector has been appointed to host a 10 day hearing in the summer into whether the landfill site should be allowed to stay open for another 15 years, past an earlier agreed closure date of February 2022.

Cllr Kelly-Wilson, who will be elected unopposed to his seat in this year’s elections, said he had moved to Newton Leys on the understanding that he would only have to put up with the noise and smells for a few years.

“For me it is not only a Newton Leys argument,” he added. “It is for me all about not dumping in our beautiful countryside.”

And Wayne Moore, a West Bletchley resident and trades union official, said: “It’s not Newton Leys-centric. It does affect us in West Bletchley.”

He said he had also had comments about why he is concerned about the issue.

He said he walks in the nearby Blue Lagoon and can see the “monstrosity.”

Once the landfill site’s life is over, the plan is to turn it into a country park.

MK Council, in opposing the licence extension, said residents will lose out if the tip is allowed to last longer than originally intended.

Cllr Emily Darlington (Lab, Bletchley East), the council’s cabinet member for public realm warned: “When the inspector comes to see the site it will be on a perfect day, when there is no problem with lorries or smells.

“We want people to provide evidence how it has affected their family barbecue and their quality of life.”

The council has stated that it wants the landfill site to close, although FCC in its submissions to the inspector says that is a political decision with no weight in planning terms.