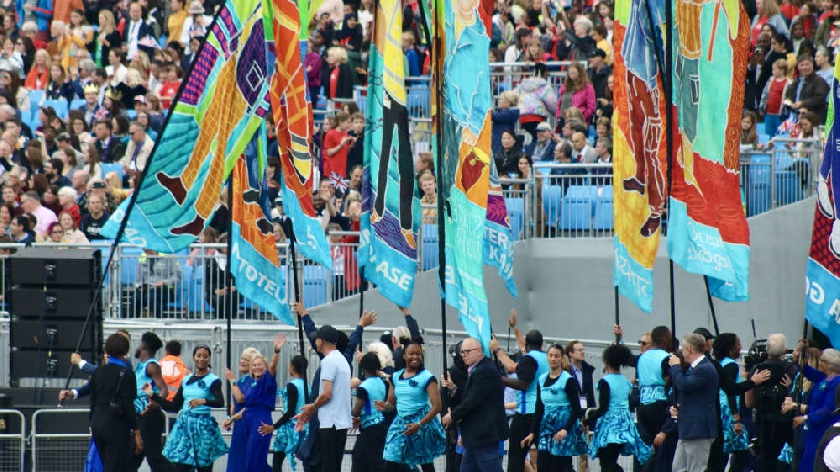 Over the Jubilee weekend, key workers, community groups, residents and students from Milton Keynes performed the ‘Thank You Dance’ in London.

The performance was all part of Her Majesty The Queen’s Platinum Jubilee Pageant. 250 people from Milton Keynes, London and Thurrock teamed up carrying silk flags, scarves and scrolls that were designed and made in their local communities in a project developed by the internationally renowned company Kinetika.

30 of the hand-painted MK Mandala flags were designed between April and July 2021 for IF: Milton Keynes International Festival.

A further 20 were designed as part of Celebrate Milton Keynes in centre:mk earlier this year.

The MK Mandalas, which were inspired by Milton Keynes Rose, represented iconic symbols of Milton Keynes and celebrated the city’s diversity, its young people and its green and blue spaces.

Students from Arts1 also joined the parade, dancing around the three queens with colourful silk flags representing environmental themes as a pledge from young people to take care of our planet.

The Thank You Dance was created by Co-Artistic Directors Ali Pretty from Kinetika and Choreographer Jeanefer Jean Charles who was awarded an MBE.

The Milton Keynes participation was organised by The Stables and supported by Milton Keynes Council, Arts Council England and centre:mk.

Producer, Rachel Wright said, “It was fantastic pay tribute to the key workers, the community and the Queen for her 70 years of service, and to see all of the participants enjoying the crowds in the Mall and in front of Buckingham Palace.”

Shobhna Padhiar who took part in the pageant as a representative of Milton Keynes Hindu Association said, “I felt very proud, honoured and privileged to have been able to represent my community in this once on a lifetime opportunity! It was immensely amazing and wonderful to celebrate platinum Jubilee for the best-known and respected Queen in the world.”

Celebrate Milton Keynes was produced by The Stables with IF: Milton Keynes International Festival, Kinetika and Jeanefer Jean-Charles, and is supported by Arts Council England, Milton Keynes Council and centre:mk.