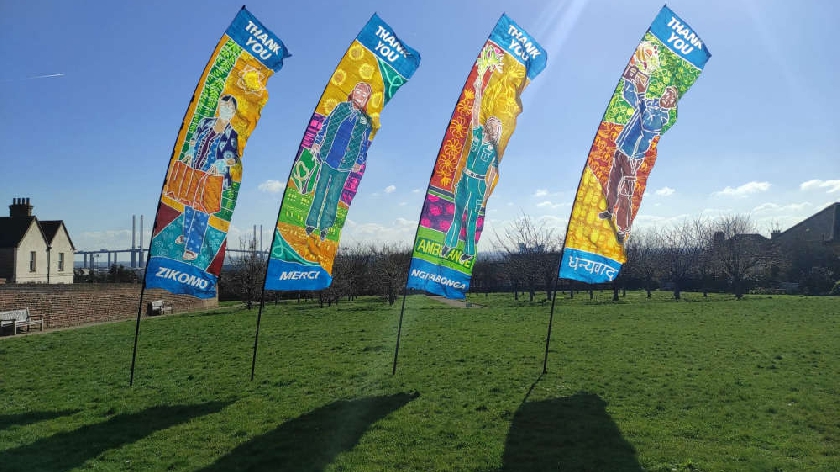 On Sunday 5th June, the nation will celebrate Her Majesty The Queen’s 70 year reign with the Platinum Jubilee Pageant in Central London.

As part of the Platinum Jubilee Pageant, Jeanefer Jean-Charles has choreographed a special 'Thank You Dance'.

14 key workers from Milton Keynes have been specially chosen to take part. They will be carrying 5m high silk scrolls, 50 flag bearers parading silk flags, 30 dancers from Arts1 and one very special ‘Milton Keynes Queen’ who will all take to the streets in London.

The flags, originally designed for IF: Milton Keynes International Festival, with a further 20 designed during the Celebrate Milton Keynes event produced by The Stables in centre:mk earlier this year, represent the themes that were drawn out during Milton Keynes’ bid for City Status.

The key workers themselves feature on the huge scrolls, including NHS staff, shop workers, teachers and charity volunteers.

Mayor of Milton Keynes, Cllr Mohammed Khan, said “It is fantastic that Milton Keynes is involved in the Platinum Jubilee Pageant and that representatives of our diverse communities will pay tribute to Her Majesty in the Thank You Dance finale.”

Monica Ferguson, Chief Executive & Artistic Director of The Stables, commented: "This project was all about inviting the local Milton Keynes community to take part in an historic Royal event. We were overwhelmed with the stories we heard and the pride people showed in Mitlon Keynes as they contributed ideas for the flag designs.

"Rehearsals are in full swing with the volunteers who are bursting with enthusiasm and looking forward to the big day. Thank you to everyone who took part in the Celebrate Milton Keynes event back in February, and look out for the Milton Keynes flags in the pageant.”

Celebrate Milton Keynes is produced by The Stables with IF: Milton Keynes International Festival, Kinetika and Jeanefer Jean-Charles, and is supported by Arts Council England, Milton Keynes Council and centre:mk.