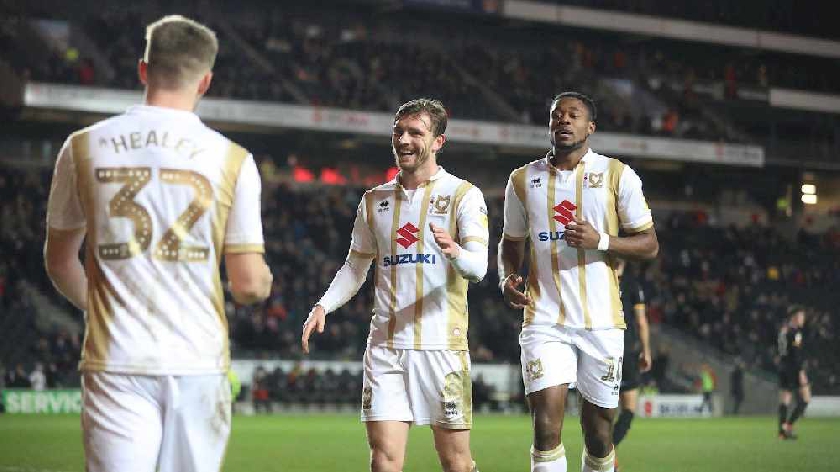 Alex Gilbey has bittersweet memories of last year’s Winner Takes All clash with Mansfield Town but ultimately, the midfielder says the confirmation of promotion is a memory that will last with him forever.

Injury forced Gilbey out of the pivotal Stadium MK clash, which took place a year ago yesterday (4/5), and therefore he was forced to watch the encounter from behind the bench along with his fellow side-lined teammates.

“For me, it was one of the hardest experiences I’ve ever had,” he said during his appearance on MKFM’s MK Dons Fans Forum last weekend.

“It was tough knowing I couldn’t really help the lads. I was so nervous and I felt like a cheerleader through the whole game.

“Once the final whistle went, though, it was one of the best feelings I’ve ever had. I remember hobbling onto the pitch trying to jump on all the lads, getting bundled by all the fans.”

He added: “It’s a day that will go down in the memory forever.”

Another key member of the 2018/19 squad who was unavailable that afternoon was striker Rhys Healey who, after scoring nine goals in 21 games, returned to parent club Cardiff City in January and missed the final few months of the season.

He, though, made sure to stay up to date throughout the Mansfield Town game.

“I was sat behind the bench at the Cardiff game and I secretly had my phone out every 10 seconds checking the score, and I was texting some of the boys who I knew weren’t involved.

“I was probably more aware of the MK Dons game than the Cardiff game. I just really wanted the lads to get the job done and once they did, I was buzzing.”