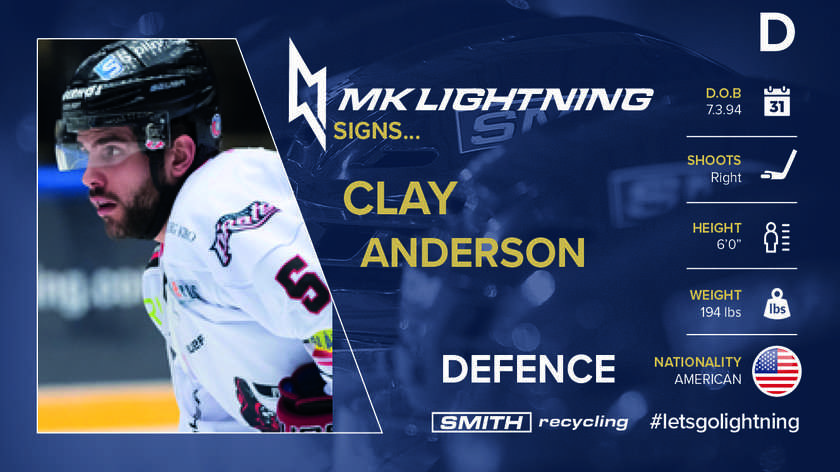 Head Coach Doug McKay has secured another promising player for the Milton Keynes Lightning in the form of American defenceman Clay Anderson.

The 6-foot, 194lbs Nebraskan joins the team after a season where he helped Danish side Aalborg Pirates to victory in the playoffs and Danish Cup as well as a second-place finish in the regular season.

Prior to moving to Denmark, the 24-year-old Anderson was a key member of the defence whilst playing for Harvard University, during his neurobiology studies.

Over four seasons, he competed in 126 regular season games for the team, registering seven goals and 44 total points.

He was also a member of the side that were NCAA Eastern Conference Champions during the 2014/15 and 2016/17 seasons, playing alongside the likes of promising Boston Bruins prospect Ryan Donato, current New York Rangers winger Jimmy Vesey and Luke Esposito, nephew to NHL legend Mark Messier.

During his season with the Aalborg Pirates, he competed in 50 regular season games and 17 playoff fixtures with the second-highest plus/minus rating (+25) of the whole team during the regular season.

He scored seven goals and picked up a further 17 assists during the regular season while adding ten more points (4G-6A) in the playoffs.

After signing on for the Pirates last spring, he was praised by Aalborg’s head coach for being able to shut down opposing players but also for having a strong offensive mindset.

Head coach and general manager Doug McKay believes his Lightning team’s defence will benefit from having Anderson in it.

He commented: “I had very good reports about Clay’s abilities – he reads the game really well and I know he will be strong for us.”

“He is ambitious and hard-working, and I know he will be a good fit for this team in a very competitive Elite League.”

Anderson will be studying at the University of Buckingham during the coming season and the university will be his corporate sponsor.