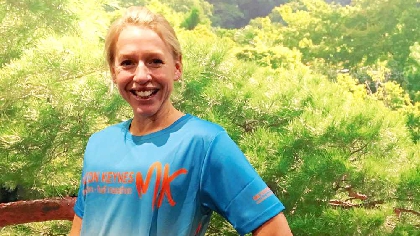 MK Marathon have announced the local celebrities who will be running alongside local residents at the event on May 1st.

Badminton gold medallist and Olympian Gail Emms and TV and radio personality Jo Whiley will be among a predicted 10,000 runners taking part in the five events which make up the Marathon Weekend.

Runners can still sign up for the full marathon, half marathon or the Superhero Fun Run (the MK Marathon Relay has now sold out).  There’s also the return of the Rocket 5K race which takes place the day before the main event – a fast, downhill 5Km run between CMK and Stadium MK.

A badminton player since the age of four, Gail Emms was first chosen to represent England in 1995 and regularly played for her country winning gold at the 2006 World Championships in Madrid and the 2004 European Championships in Geneva, and a silver medal at the 2004 Olympic Games.

Gail said: “Milton Keynes is an amazing place to live and I’m a big fan of the MK Marathon event.  I’m honored to be a VIP Ambassador for 2017. Please join my team so we can run together.”

Runners can join Gail at the start line by selecting a time of 1:50 or less when they sign up.

Jo Whiley presents the Evening Sessions on BBC Radio 2 and TV coverage of major music festivals including Glastonbury. In 2014, Jo completed a 26 hour treadmill challenge for Sport Relief and she is a keen runner.

Jo said: “I had such a brilliant time doing the MK Half Marathon last year. It was extremely well organised, the route was great – just the right amount of road running and pretty waterside tracks and running into the stadium for the final bit was quite something.  I’m looking forward to taking part in the marathon this year.”

Runners can join Jo at the start by selecting a time of 2:15 or less.

Event Director Andy Hully said: “We’re thrilled to have such high profile VIP Ambassadors for the Milton Keynes Marathon this year and would like to thank Jo and Gail for the continued support for the event.  The route passes through some of the most beautiful parts of the city and ends in Stadium MK so it’s a great opportunity to showcase what an amazing place Milton Keynes is.”

Milton Keynes Marathon is ideal for first timers wanting to enjoy the scenery on a mostly flat course, or serious runners looking for a fast time on an official AIMS/IAAF Grade A certified marathon distance.

The new route which debuted last year was designed to pass through the most picturesque parts of the new city and takes in the countryside and parks of the Ousel Valley, Bradwell Abbey, Woolstone and Milton Keynes Village as well as landmarks such as the Peace Pagoda at Willen Lake and of course, the concrete cows.

After being cheered across the finish line in Stadium MK, runners will be celebrating with a set of exciting new medal designs incorporating the MK50 logo and a finishers’ T Shirts which will also be MK50 branded so it’s a great opportunity to do something memorable to celebrate the city’s birthday and take on a personal challenge.

As well as consistently being ranked in the Top Ten of UK marathon events, Milton Keynes Marathon is also one of the best organised, with British Association Road Race Gold accreditation for outstanding race management.  Even details like bag collection are taken care of with the local Scouts waiting as runners leave the track, ready to call out race numbers and run back with their belongings.

There’s plenty of fun in store to keep everyone entertained with a brand new Family Zone featuring a live DJ, music and entertainment plus inflatables, a climbing wall, bungee trampolines and bumper cars.

New for 2017 is a partnership with Brioche Pasquier’s new production facility in MK who are providing 10,000 brioche buns for finishers. Other local businesses supporting the event include Marathon Relay sponsor BMI The Saxon Clinic, Subway, APLE, Murrays and Jeanius Consulting.  Sponsorship opportunities are still available.

Local residents can view an interactive map online at mkmarathon.com to see which roads will be closed off for the event and where to cheer on the runners as they pass.

To sign up to take part, please visit mkmarathon.com.