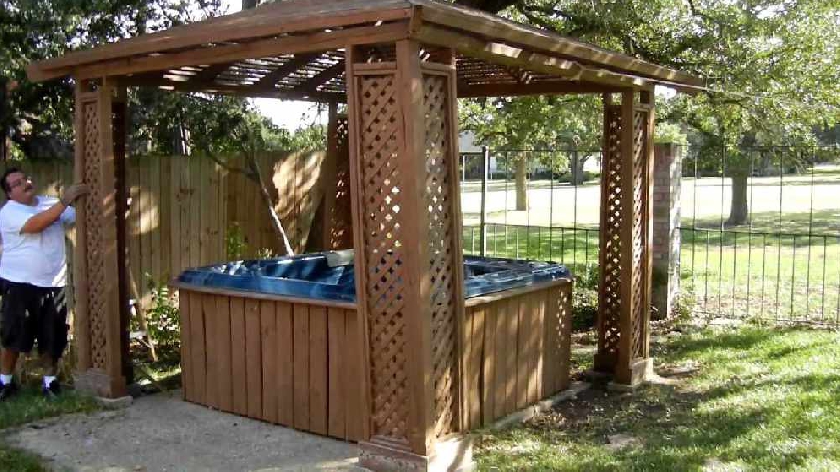 Photo for illustrative purposes only. Credit: Gottabighit1 on YouTube

Neighbour relations in a leafy part of Stony Stratford reached boiling point over a plan for a hot tub gazebo.

It all kicked off on Milton Keynes Council’s planning website after Mr and Mrs Cunningham applied for retrospective permission for the open-fronted gazebo enclosure, and an extension to their garage, in Tudor Gardens.

He wrote: “A previous application for a two-storey garage, for accommodation for family (or workers?) was rejected and I remain concerned that this remains a goal and expanding the garage footprint would be a step towards reapplication.”

The “workers” comment fired up the Cunninghams who took the opportunity to respond on the publicly accessible website.

“The objection from the keyboard warrior is referring to the internal work presently going on at no 9,” they blasted back.

“This very sad man has objected to everything except a will to try and bring his own property up to a standard more befitting of Tudor Gardens, as with most properties around there.”

They added: “We always welcome constructive critique, sadly the ‘gentleman’ in question always gets personal. There really is no need for his ‘workers’ comment.”

The council received seven comments in total during its consultation on the plan. Two comments were in favour, and five against, the planners’ decision report said.

Supporter David Burke said: “So far the work completed at this property has been well executed, and to my mind enhances the overall appearance of the house.

“The bath house, whilst visible if I look over the adjoining fence, is attractive and does not impact me in any way.”

But Adrian Fitch wrote:  “Even though the current proposed building works don’t directly affect us, I know they do affect my elderly neighbour.

“I understand he is currently taking legal advice.”

And David Hanss FRSA complained that the council had taken no notice of him when he pointed out that building work was taking place.

“Now for myself the important point is that this mess you have helped create is either a case of ineptitude or possible fraud, you can be assured that I will not let this matter rest and I will do my upmost to resolve it,” he wrote.

Planning officers at Milton Keynes Council were given the responsibility of deciding the plan, and they came down on the side of the Cunninghams.

They took the decision using powers delegated to them, without going to a committee of elected councillors.

Senior planning officer Richard Edgington wrote: “Due to the plot sizes of dwellings within the locality, there are considered to be sufficient separation distances between the proposed extension and structure for the amenity impacts to be acceptable.”

They also said the 3.15m high hot tub enclosure, even though it is a “prominent feature within the garden,” is 18m away from the neighbours and was “therefore acceptable.”