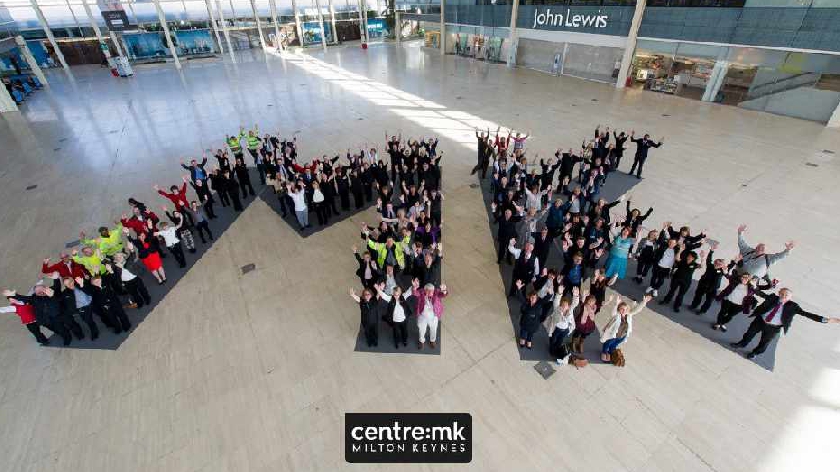 The owners of centre:mk have been given permission to replace the ceiling over Middleton Hall to make safety improvements.

Hermes, the owners of centre:mk, are planning to stop using Middleton Hall for events until the autumn to allow the ceiling to be replaced with a structure that will be better able to let out smoke.

And, while a leaking fire sprinkler system at risk of “catastrophic failure” is replaced, events normally held in the 0.44 hectare covered square will be moved out into the flanks on either side of John Lewis.

Events including the Garden Show, Craft Show, Fashion Show, Motor Show, MK College events and the International Festival, plus summer activities will be moved. The owners are hoping though to still be able to use some parts of Middleton Hall.

Hermes applied for permission to Milton Keynes Council to make changes to the building, which was given grade 2 listed building status in 2010, and is protected by law.

Planners at the council used their delegated powers to grant permission for the works.

They agreed that it would cause some harm to the historically important shopping centre but this was more than balanced by the public interest in allowing the work to be carried out.

Background papers to the decision say that the owners, the council, and heritage watchdogs Historic England, have been honing the plans for 18 months, to come up with an acceptable solution.

“It is clear that the applicant’s design team have sought to reach a design solution that avoids or minimises harm to the listed building,” say council planners in their decision report.

“Whilst the type of system proposed will alter the character of ceiling, it is not wholly unknown to contemporary buildings of the era.”

And a new public address system is set to see a number of vertical speakers on prominent faces of the columns within Middleton Hall.

“The proposed development is considered to result in less than substantial harm to the listed building.

“The detail of the proposed development, however, and direct resulting public benefits of the proposal are considered to outweigh this harm caused.”

Rachel Fletcher, inspector of historic buildings and areas at Historic England, said: “The new system would present the appearance of a simple white ceiling when viewed from some angles but when beneath it the soffit above will be visible.”

The owner’s agent told the council that “The existing sprinkler installation is over 40 years and severely corroded with frequent leaks from the pipework.

“Extensive testing has proved there is a significant problem and there is a risk of catastrophic failure of the pipes.

“Sprinkler repair works for centre:mk has been on-going since 2015,” they added, saying that this is the last of six phases.

They will also be taking the opportunity to replace any flooring that has been damaged over the years.