Plan for 1,450 new homes to south east Milton Keynes firmly on the drawing board 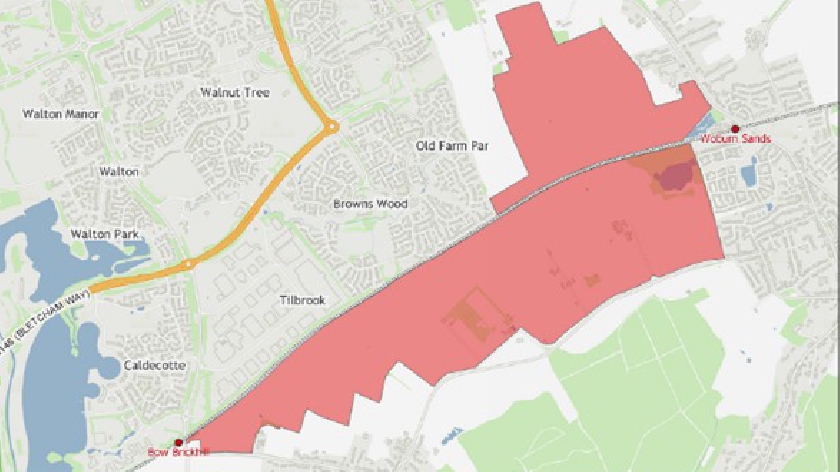 Plans for a huge new community with up to 1,450 homes to the south east of Milton Keynes are being drawn up by developers.

Owners of land to the west of Woburn Sands and south of Wavendon have asked Milton Keynes Council whether they will need to provide an Environmental Impact Assessment (EIA) when they eventually lodge a planning application.

A company called O&H Q7 owns the entire site and is working up proposals for 1,450 homes, a primary school, a local centre, open spaces, sports pitches and children’s play areas.

They are also looking at safeguarding land for the extension of the H10 grid road, a relocation of Woburn Sands railway station, a new bridge across the railway line at Bow Brickhill Road, and an interchange for a mass rapid public transport (MRT) system.

The land is already allocated for housing in the city’s development bible Plan:MK which was approved by Government and the council in 2019.

But the council is still consulting on its masterplan for the area, which is called the SEMK Development Framework.

Public consultations close this Monday, April 19, and Walton Community Council for one is urging people to have their say on what they want from the development.

Developer’s agents Varsity Town Planning have told the council that plans for the 80 hectare site will be “prepared in accordance with Plan:MK and the South East Milton Keynes – Strategic Urban Extension Development Framework, which is scheduled to be approved as a Supplementary Planning Document in 2021.”

The agents say that the development will most likely affect the landscape, heritage and archaeology, biodiversity, soil conditions, air quality and noise, water and drainage.

“The proposed development will seek to identify and mitigate adverse impacts where possible,” say the agents.

One objector, Keith Bell, has already queried the request, calling for it to be “null and void until the SEMK framework has been updated and publicly approved.”

But planners have responded by saying that “I appreciate that this coming forward during the SEMK SUE consultation could appear premature, however, the site is allocated for development in Plan:MK and Policy SD11 states the key requirements for the development.

“As far as I can see there is no reason not to validate the request and process it.”

Council ecologist Diane Evans has also responded by saying that an EIA“will be required for this development.”

The public can have their say on the development framework here: https://www.milton-keynes.gov.uk/planning-and-building/planning-policy/south-east-milton-keynes-strategic-urban-extension.

The screening request for an EIA has been lodged on MK Council’s planning website.