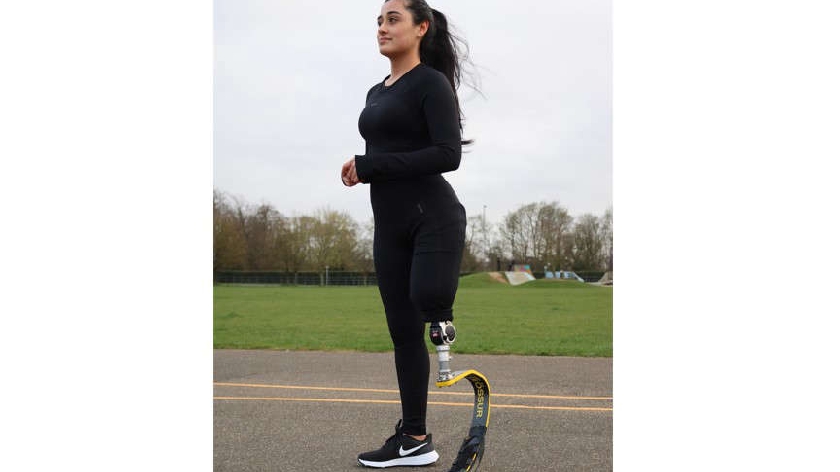 Keen runner Dema Aktaa, who lives in nearby Flitwick, lost her leg in an explosion when her Syrian village was attacked in August 2012.

After coming to the UK in 2017 as a refugee, charity my AFK (Action for Kids) helped her find funding for a running blade costing £13,500. She has now been able to start training again and hopes to compete in the next Paralympics in Paris in 2024.

Dema said: "When we were attacked, a bomb exploded, I went from the living room to the balcony and straight away, I lost my leg. It was a shock, of course, but there was no point getting too upset about it, sometimes things just happen. It’s hard to accept yourself the first few years, but after that, you have to work with it because it’s not going to change. But it’s life and I’m happy now because it makes me unique."

The 27-year-old moved to Lebanon and six years later came to the UK.

She continued: "Before my accident I was a keen runner, competing in school competitions. When I arrived in the UK, I wanted to give something back. I decided to do a sponsored walk for Choose Love which supports refugees. I was delighted to raise around £1,000. My friend Ben suggested I also start fundraising to try to buy a blade so I could get running again, my AFK saw my fundraising page and got in touch. And it all went from there."

Julia Paylor, my AFK Advocacy and Mobility Manager, added: ‘We really wanted to help. Dema had already raised some funds from a sponsored walk with her friend Ben. We agreed that we would part-fund her running prosthesis, and that I would also apply to a number of different charities on her behalf. So I applied to five or six charities, most of whom were also really struck by her story and wanted to help.

"Dema now has her running prosthesis and she’s sent us videos of herself learning to use it. It’s so lovely to see her rekindle the passion she had before her injury."

Dema added: "Running with the blade feels almost like flying! It means a lot to me and I can’t thank the people who helped me enough. This summer, I’ve been really enjoying watching the Paralympics and hope to be in Paris myself in 2024."

This comes as high jumper Jonathan Broom-Edwards, from Newport Pagnell, won gold at the Paralympics on Friday (3/9).

He won the global competition with a season's best jump of 2.10m during his second attempt in Tokyo.