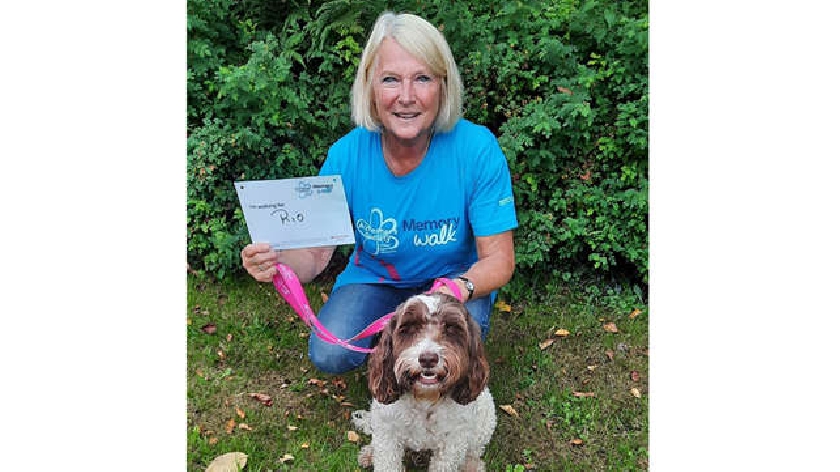 A soap script writer and actor will be remembered by his wife as she prepares to join the Alzheimer’s Society’s Memory Walk.

Rio Fanning had an established career both on and off screen, appearing as an actor in several TV shows such as BBC’s The District Nurse in the mid-1980s as well as in Father Ted and Doctor Who.

Rio was known most for his work on scripts for EastEnders between 1985 and 1995, he was also the storyline editor for the soap for several episodes.

His wife Karen, who is also known for her acting career, will join hundreds of other supporters stepping out at Willen Lake, Milton Keynes, on Saturday 2 October in aid of Alzheimer’s Society.

Keeping her company will be the family dog Peggy.

She said: “Rio loved his dogs and during his last year we sadly lost two of them. His decline was rapid from there, almost like he’d lost the will to live. It’s only right that Peggy joins me on this walk as Rio knew her too. She’s ready to go with an Alzheimer’s Society lead.

“Rio’s diagnosis came very late during the end of his life. I feel as a highly intelligent and creative man who was constantly writing and reading, he was able to mask the symptoms of dementia well, especially when it came to memory tests by health professionals.

“However, I could see the changes happening over time and it was heart-breaking. In his latter months he became very withdrawn, he couldn’t write, he would walk to the shops in his pyjamas and have shoes on the wrong feet.

“To see such a cleaver man become a shell of his former self was incredibly hard.

“After an accident at home, he was taken into hospital where tests confirmed other underlying health conditions which led to his death but a CT scan confirmed his diagnosis of Alzheimer’s.

“I’m talking part in the Memory Walk to help raise money for research so others with dementia can have a better quality of life for longer. It is also important to keep raising awareness."

Karen is encouraging others to join her and Peggy, by lacing up their boots to raise vital funds for the charity.

Her commitment comes at a critical time for those affected by dementia.

Over a year since the pandemic began, people with dementia are still bearing the brunt of coronavirus and demand for Alzheimer’s Society’s services is increasing.

Tina Kierman, Alzheimer’s Society Area Manager for Northamptonshire, said: “Alzheimer’s Society’s services have been used over six million times since March 2020 and have been a lifeline to thousands, but there are so many more who urgently need support.

“This Autumn we are calling on family, friends and colleagues to put their best foot forward and walk with us. There’s still time to sign up and join us at Willen Lake, in Milton Keynes on Saturday 2 October.”

Anyone wishing to support Karen can do so by visiting her JustGiving page.