What Dragonflies and Damselflies can you spot in Milton Keynes? 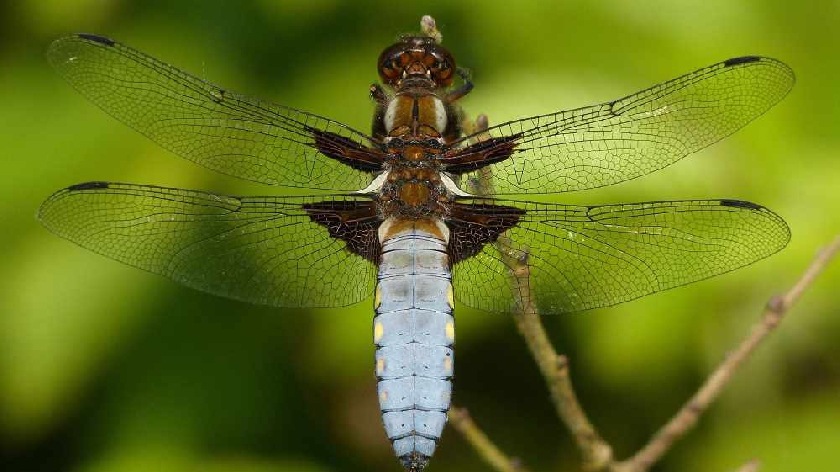 Sometimes known as jewels of the air, dragonflies and damselflies are a familiar site around the lakes, ponds and rivers of Milton Keynes.

Late May sees the emergence of the majority of our native species and now is a great time to go and look for these stunning insects.

Dragonflies are typically larger and more thickset than damselflies. They can be told apart generally by their resting postures – dragonflies rest with their wings held at right angles to their body, whereas damselflies tend to rest with wings folded back along their body.

Early flying species include the Hairy Hawker (usually the first dragonfly to emerge) and the Four-spotted and Broad-bodied Chasers. The male Broad-bodied Chaser (in the picture) is a striking dragonfly, with a bright blue abdomen and yellow flanks. A little later in summer, look out for the Emperor (our largest species) as it patrols ponds and lake edges, as well as Brown Hawker, Southern Hawker and the brilliant red Common Darter and Ruddy Darter.

The Large Red is usually the first of the damselflies to emerge and these can now be seen in good numbers in many of our parks. A number of slender blue damselfly species can be abundant at lake margins and these are difficult to identify without a good ID book or app. One to look out for, is the White-legged Damselfly, an uncommon species whose white, hairy legs are a giveaway!

In recent years, several rare species have spread in Milton Keynes and we can now count the Scarce Chaser, Willow Emerald Damselfly and Beautiful Demoiselle among our 21 species (with hopefully more to discover).

Stony Stratford Nature Reserve is one of the richest sites, with 20 species recorded down the years. Walton Lake and Tattenhoe linear park are also extremely good places to watch dragonflies but any freshwater habitats in Milton Keynes should boast a dozen or so different kinds.

MKFM and The Parks Trust would love to hear about any species you spot - tag us social media @mkfm and @theparkstrust!