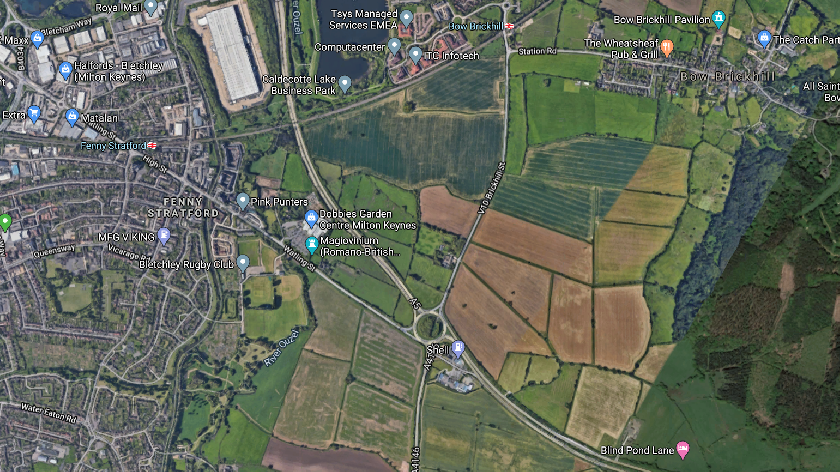 Councillors have rejected a developer’s bid to turn a 58-acre harp-shaped slab of land into a massive warehouse park.

But Milton Keynes Council’s development control committee found themselves in a tangle over a draft policy document that supports such a scheme for land off Brickhill Street, South Caldecotte.

The draft document has officially been put to one side while the council waits for a Highways England decision on the route of a new proposed expressway road from Oxford to Cambridge.

But Thursday’s committee meeting heard a claim that the mere fact that a draft framework has been published, criticised, published again, attacked again, and now been put on the back burner actually gives it “weight” in planning terms.

Using the fact that the framework hasn’t been made official would not provide grounds for rejection, the committee heard.

Cllr John Bint (Cons, Broughton) asked his planning officers to either kill off the document or fix it.

“The document has been discredited,” said Cllr Bint.

“The fact that you keep asking people did they like it, and they keep saying “no”, it is almost as if you keep saying no gives its content greater validity, even though everybody keeps saying “no”.

“We somehow need a system to kill it off and ensure it has zero status until the issues raised have been resolved.

“The cabinet should fix or bury it,” he added.

Planning officers recommended refusing the application because it would, they said, destroy the area’s biodiversity and cause potential traffic problems on the A5 Kelly’s Kitchen / McDonald’s roundabout.

The council’s archaeologist also called for the plan to be thrown out because of damage to Roman ruins.

But, the developers challenged that, saying that their own nationally recognised expert gave the site much lower status.

Planners recommended using archaeology as a possible third reason for refusal, but they have to wait until their specialist comes back from holiday before they can add that reason.

“We are extremely disappointed that you have in front of you a recommendation for refusal of this application,” said Mr Robinson.

“The applicant has responded quickly to consultee concerns and have addressed issues within your officers’ report.”

Mr Robinson said they had been working with council officers for two years on bringing forward a plan on the site which supported ” economic growth, employment, and investment.”

He offered deferring the scheme until the committee’s meeting in April to sort out issues.

But senior planning officer David Buckley said a key response from Highways England would not be received by then.

As the committee did not meet in May, the earliest they could decide the issue was June, and the applicant was not willing to wait that long.